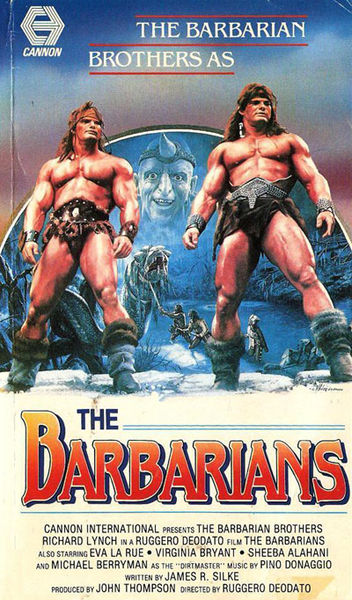 Also known as: The Barbarians and Co.

Description: The young orphans Kutchek and Gore have been adopted by a tribe of clowns, jugglers, and entertainers. The tribe is led by the queen Canary and its wealth stems from her magical belly stone. The evil ruler Kadar desires Canary and her stone, and attacks her clan’s caravan to gain possession of them. Before the clan’s defeat one of the clansmen sneak away to hide the stone. Canary is locked up in Kadar’s harem, Kutchek and Gore in his quarry to be trained as gladiators, and the rest of the clan is to live as outlaws in the woods. When Kutchek and Gore have grown up to VERY big gladiators, they run away and break into Kadar’s harem with the aid of the young woman Lemone. Canary quests them to find “The Old King’s Weapons” and with these kill the dragon that guards the hidden belly stone. Afterwards they should find a new queen and give her the stone, to restore the tribe to its former glory.