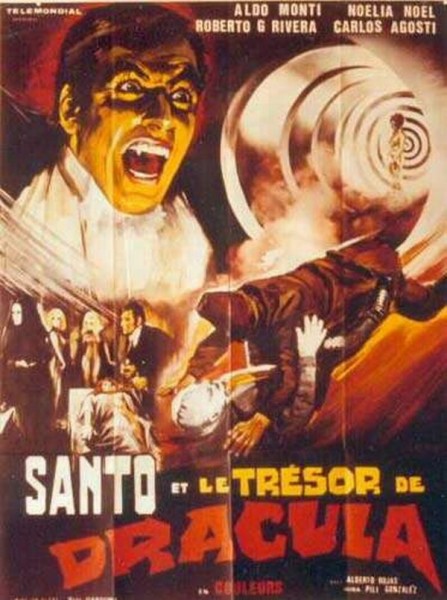 Description: My first experience of the amazing Santo, and it’s probably as good a place to start as any. Santo, a legend in Mexico for decades, is a silver masked wrestler turned crime fighter. In this movie he’s also a scientist and invents a device that can transport people back in time to relive their past lives. A small group of scientists gathered together by Santo’s friend Dr. Supulveda greet this announcement with incredulity. Santo needs a volunteer to save his scientific reputation and Supulveda’s daughter Luisa volunteers. Donning a silver jumpsuit she enters Santo’s time tunnel device and is transported into the late 19th Century where she is now the daughter of a Professor Soler. Soler is worried about his daughter’s declining health and has called in his old friend Professor Van Roth for advice. Van Roth immediately sizes up the situation and suspects Soler’s neighbour the mysterious Count Alucard (yes, you guessed it!). Back in the present Santo, Supulveda and their cowardly friend Perico witness these events unfold on closed circuit television. After Luisa is bitten by Dracula, Santo saves her from a staking by returning her to the present. Santo and friends then decide to try and locate Dracula’s treasure, but things are complicated by a masked stranger intent on the same goal, and when Dracula is resurrected he continues to have a hold over Luisa who he wishes to make his eternal consort… This movie is a lot of fun

4 Responses to Santo and Dracula’s Treasure (1969)