Description: Movie in three parts; a one-act play, a short story, and a fable, bringing them all together brilliantly. It may seem talky at first, but there is some genuine thought going on behind the talk, and some of the images are gorgeous. The first story is a one-act play about a father and son, both famous scientists. The father attempts convince his aging son to kill himself in order to achieve immortality. A character watching that play meets a courtesan named Suzy. He becomes obsessed with defining her and trying to immortalize her. Her response to nearly everything is, “it’s a small thing.” Finally, that character’s best friend tells him the story of “The Mother of a River” and Fisalina, the restless and troubled young girl who can’t accept life in her village. She becomes the next Mother of a River, destined to live for 1000 years until the next comes along. In essence, these three very different stories are all about mortality and identity. Oliveira is interested in who we really are and has the experience, the wisdom, and the patience to show it well. 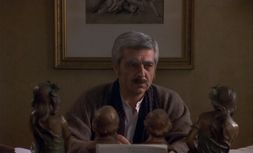