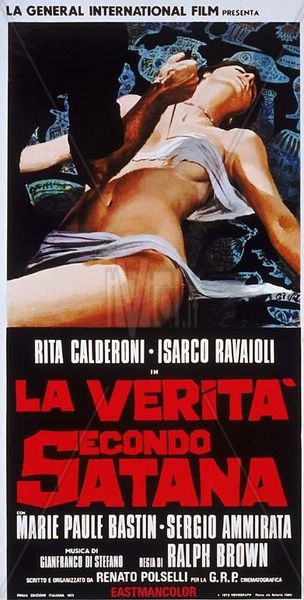 Also known as: Il vangelo secondo Satana, The Truth According to Satan

Description: A man (Isarco Ravaioli) wants to commit suicide due the coldheartness and egoism of his fiancee, played by Rita Calderoni. After he “plays” a few times Russian roulette without the intentioned effect.., he calls Calderoni and tells her he wants to kill himself, she visits him without knowing what awaits her.. the man takes his knife and tortures her a bit with his knife..then he stabs himself in the stomach..and dies..or not?. Rita wants to get rid of the corpse and hides the corpse in a chest. But she gets more problems when she notices a man from her window who has seen everything. The crazy man (as if he came from an Italian comedy) is a wacky guy, who seems to take everything cool and not serious is invited to come in and starts to play the sadist. He throws some meatpieces on Rita´s nude body just to feed the dog, and after that when Calderonis “slave”, a black woman visits them, commands her to whip Calderoni. After this, Calderoni wants to make it that the black woman was the murder, but the woman (her personal “plaything” by the way..) has no interest to help her. Rita starts to get crazy.

Note: my special thanks to darioargento who made this custom possible and allowing to share this on rarelust. adding his (darioargento) all notes regarding how this custom vhs made…..

The Sources are the tower VHS and a totally redone , colour corrected, resized german vhs.  There is now 42 minutes of better quality footage re-dubbed with Italian Audio, with a little german audio  as those scenes were extensions missing from the tower print.  I’ve not included all the alternative footage, as one scene for example it was impossible to find where it was supposed to go, also the alternative hippy orgy scenes are not included as a test version showed that including these it indeed extended the runtime to over 88minutes but lost the flow of the end scene so these were omitted.  And thanks to a nice email conversation with wanyon who confirmed that the tower hippy scene was as Polselli intended.
I wont list every additional scene, i’ll leave that to the viewer to look out for.
Now again thank you to ganjafarmer who subbed the main movie , thanks also go to mrblonde1369 who subbed the Pre-credit “Sins” sequence and finally to pipipip who subbed the german audio scenes.

The Special Features are as follows:
An Interview with Renato Polselli originally shared by stallef but now with English Subtitles Created by ganjafarmer , interesting fact that this interview was conducted by Pete Tombs. Who is clueless about how it ended up in collectors hands – but thanks to Pete for his fascinating interview.
An Interview with Rita Calderoni – great little interview which actually contains a fraction of a lost scene, the alternative spoken title sequence and her memories on working on the movie and of Polselli.
The Cutting Room Floor – a deleted scenes montage
All the alternative footage which couldn’t be used, put to music and effects added.
Slideshow – Thanks to thr33 who supplied the jpegs , these are also missing scenes.
My Biggest project yet and a huge thank you all those that created the subtitles, helped with info, and answered my sometimes inane questions.