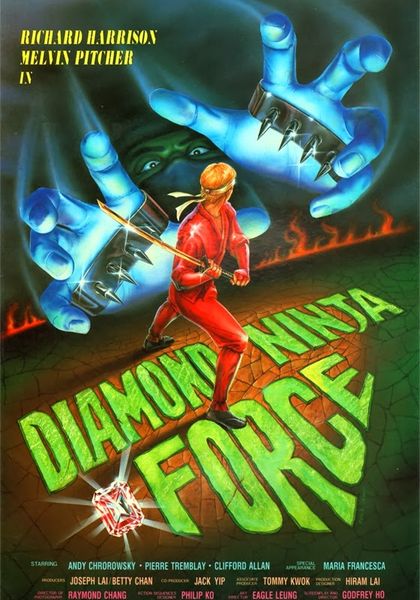 Description: When Gordon is taking his girlfriend’s picture in Hong Kong, several Caucasian thugs led by a Chinese man, Kogan, threaten her, so he beats them up. Elsewhere, Bernard Wong pays his workers extra money to continue digging his land after discovering human bones. The thugs are members of the Black Ninja Clan, whose dead are buried on Wong’s site. One of their operatives strangles Gordon’s girlfriend, believing she knows where Gordon has hidden the Golden Ninja statue that apparently gives him power and won’t say, while another hires Ghost Ninja, a beautiful witch dressed in white to kill Wong, his daughter Fanny, her husband George, and her son, Bobo, for three million dollars. Fanny is frightened by a cat in the house upon move-in, and the Black Ninja leader keeps swing her sword to hallucinate frogs jumping to their deaths out of her refrigerator and her soup ladle turning into.